This blog post is about a university project Alex, a fellow student at my university, and I have been developing over the last months as part of our Master studies. We are both quite experienced software developers focusing on application and web development. As part of a university project we had absolutely no requirements on a coding language or styling. As the only requirement was being a web site and we both knew absolutely nothing about on how to create single page applications, we looked around and eventually chose AngularJS.

We didn’t start from scratch, though. There was a prototype from last semester from another team we used for inspiration. The only problem with the project was being written as a JavaEE application. The setup, even to make it run locally, would be too complicated for the use case. Furthermore we both didn’t like the idea coding in Java; Alex already using Java at work and wanting to expand his knowledge, and Markus trying to avoid Java for various reasons.

The web site should list information about all kinds of schools in Berlin. A user should be able to filter and search for schools by different criteria. The intention of the university course and the project is to learn about OpenData and Data Journalism. The city of Berlin offers a similar service already, although the user experience is just “meh”.

We took the data set the group acquired in the last semester and normalized it even more. We also performed some additional cleaning. For example if a URL was given for a school we checked whether that URL was reachable or not and accordingly removed those URLs that couldn’t be reached.

Looking at the problem from a system architects point of view clearly shows relations between many parts. While a school has a single address it might have multiple types, like elementary school and high school. A school probably teaches multiple languages, not only German but English, French, Dutch or Chinese too. Thus a relational data store / database like PostgreSQL or MySQL would be one’s first choices.

Contrary to what a system architect normally would do we chose a technology not intended for the given use case: a vanilla Elasticsearch instance. We chose this technology for several reasons:

Import of the Data

The original data source consists of several Excel documents. These were provided by the city of Berlin and have been normalized by our fellow students in the semester before. For easier handling we transformed those files to the CSV format. Later these CSV files are used to import the data into the Elasticsearch instance.

Before doing this we created a data model bringing some of the features of a relational database into Elasticsearch. Additionally this step is used to set up and configure how Elasticsearch handles the data, mainly (not) analyzing and (not) indexing.

As you can see from the excerpt above we are using Elasticsearch’s Nested Mapping Type. We decided to use this type over inner objects or Parent/Child Types for two reasons:

[First,] each nested doc remains independent, and [one] can perform a query like [address.district=Kreutzberg AND address.plz = 10999] without a problem. [Second], reading is faster than the parent/child because the nested document is stored in the same Lucene block as the main document. [ES13]

Although writing may require re-indexing the entire document, this is no problem for our use case as the data is imported once.

We are no designers. But we wanted to create a web-page that is both faster and more functional than what the original web page of the city of Berlin offers. We did not target mobile browsers in particular but if we could support them in a reasonable way, then we would do that. Markus is a fan of Zurb Foundation, therefore we decided to use this CSS framework as a starting point for our layout.

Since our data-store is an Elasticsearch instance we had the possibility to retrieve data directly from the browser via JSON requests. Therefore we decided to create a single page application and eventually chose AngularJS. We also delved a little bit into the world of Website front-end development tooling by using the current state of the art Bower, Grunt and Compass tooling.

Our app has three important components: 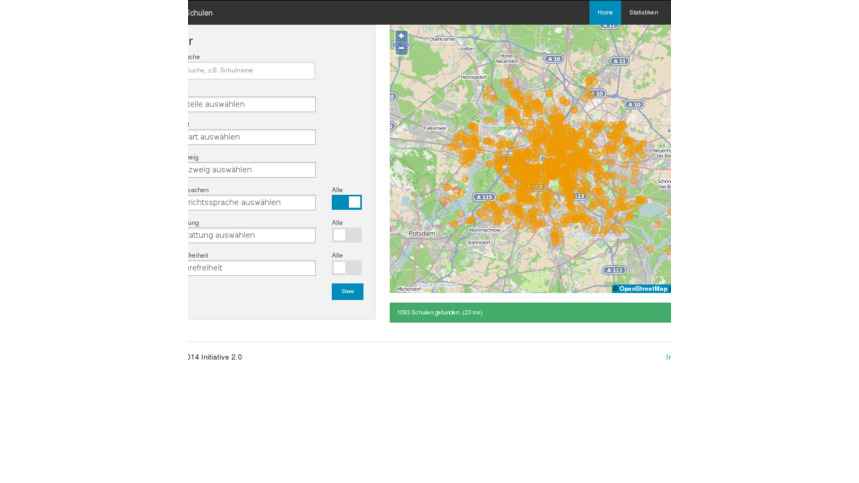 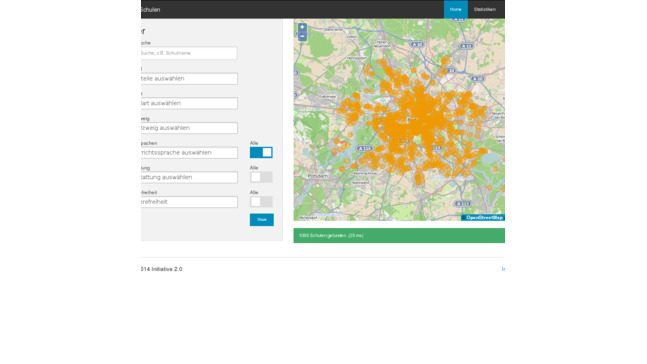 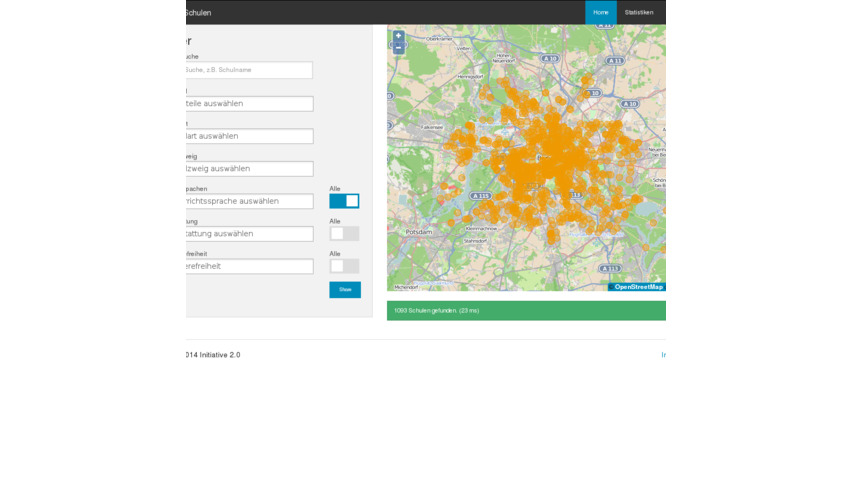 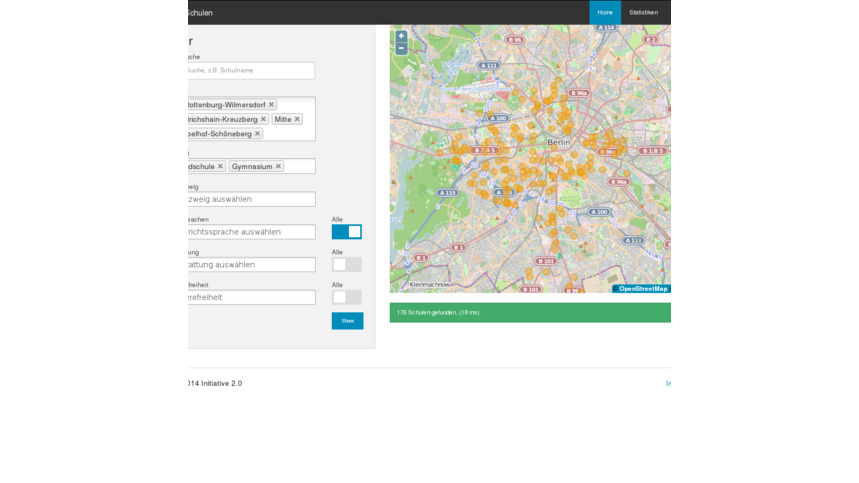 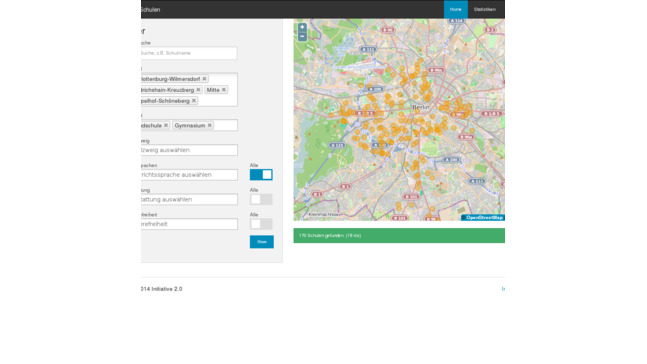 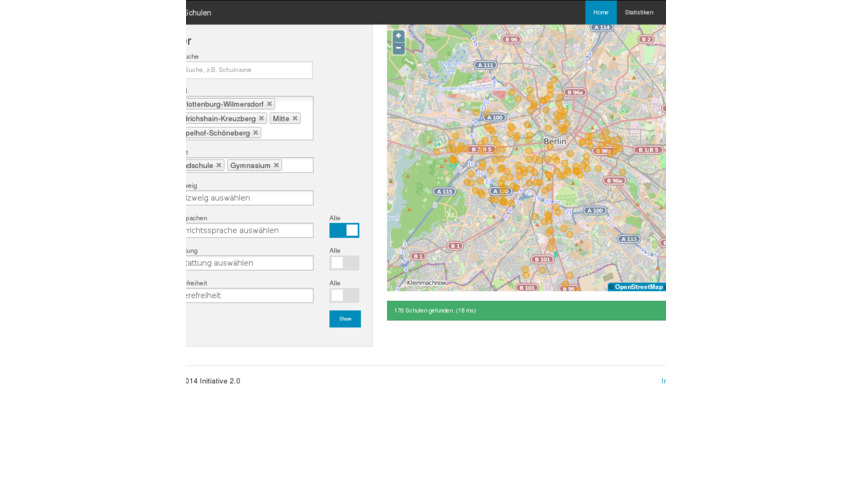 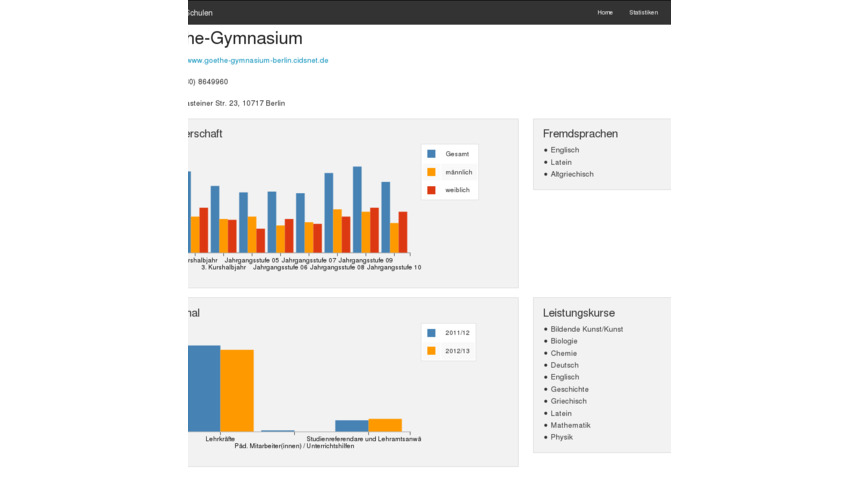 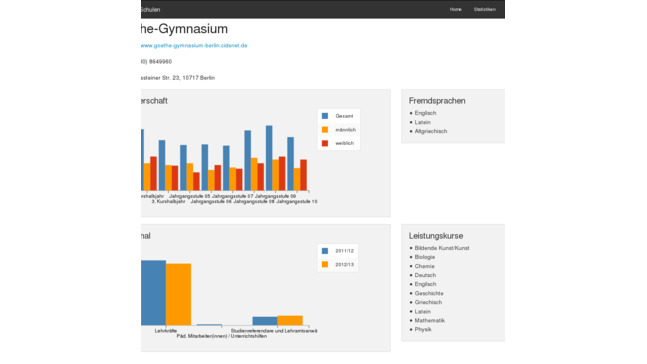 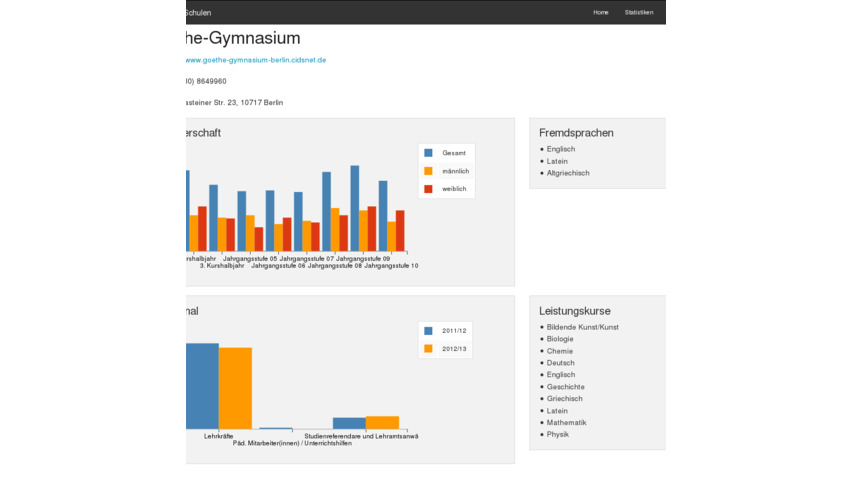 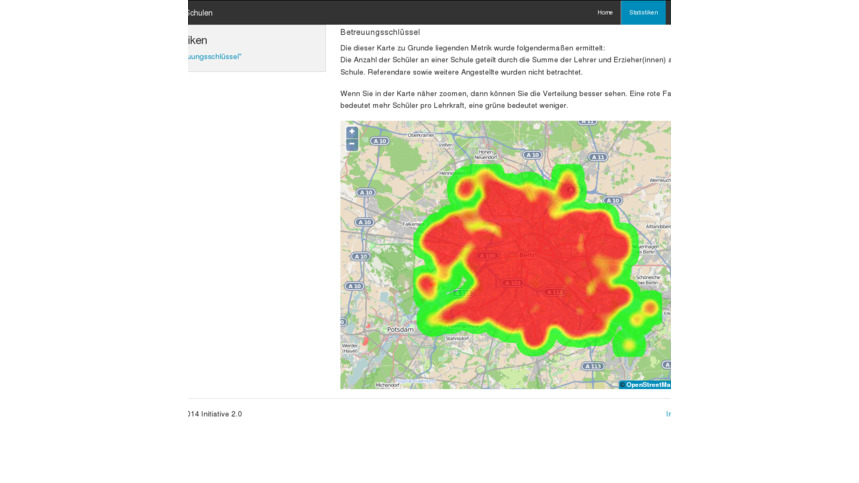 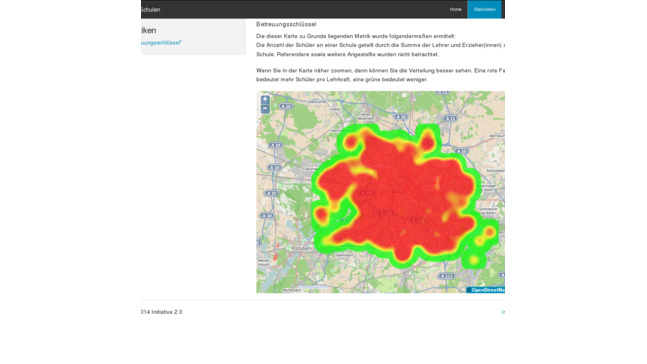 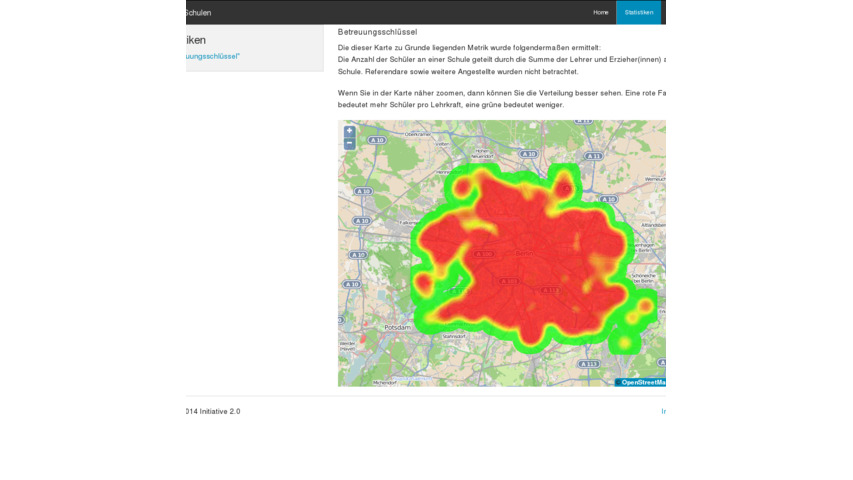 The filter data is dynamically retrieved from Elasticsearch upon page load using a HTTP POST query to the search URL with a body like:

The idea is to aggregate all distinct values available for various fields. The nested block does that for the district (as this is a nested object), the branches block exemplary shows how it is done for direct attributes.

The map component is responsible to display the result of a filter operation. The map is shown using the Openlayers JavaScript library.

The detail page is quite straightforward. One requirement we defined for the detail page was, that we should be able to provide a deep linking option. This was actually quite easy to implement using the ngRoute module of AngularJS.

The URL is defined to look like this: “domain.de/#/schools/BSN”. The BSN is a unique identifier for each school in Berlin (we assume it stands for Berlin School Number). The ngRoute module allows to specify parameter captures in the route definition, so it’s very easy to access parts of the current URL in the JavaScript code. The route definition for the school detail page is:

Using the schools identifier we make a simple lookup in Elasticsearch and get the document for the school. Since Elasticsearch returns data in JSON format we can just set the returned value in the scope of the detail page controller, the layout will then be automatically updated by AngularJS.

As already stated above, we chose a way for the implementation that lets us circumvent the usage of an application server (as it would be needed for Java or Python). Instead the page only requires a web server and Elasticsearch to run.

An exemplary Nginx server config can look like this:

By only allowing GET and POST and restricting those queries to a limited URL pattern we can make sure nobody can remove or add some data or even drop the index.

Apart from the protections of Elasticsearch mentioned above, it is highly recommended to disable dynamic scripting as this would potentially expose the entire server to the outside world. Setting the Elasticsearch network host to 127.0.0.1 is also required. Otherwise people could connect directly do Elasticsearch and any of the Nginx protections wouldn’t matter.