This post is a continuation of the blog series about the student research paper CloudRAID.

Since the performance is an integral part and a key aspect of the software and even more one of the most important piece, the following chapter will show some performance tests and benchmark results.

In order to make the benchmarks reproducible this chapter will set up some benchmark environments. They define the hardware as well as the software that is used for the benchmark tests.

One of the key functions of CloudRAID is to ensure data-security and data-safety. Therefore CloudRAID uses the previously explained ARC4 encryption standard andthe RAID level 5 implementation. Since this time critical operation is used during each CloudRAID cloud interaction, a run-time evaluation during the prototype state was interesting.

To make this key component fast, there have been prototypes in Java, Python 2 and C. All three implementations were working with the same algorithm but of course had a big differences when comparing their run-time.

The following table shows the run-time for the “split” process on a 15 MiB file using bitwise RAID level 5 without encryption and without hash calculation.

As one can see from the previous table the run-time for Java is more than 2.5 times as long as for CPython2, more than 7 times longer than for PyPy and 77 times longer than the native C implementation. The speed of CPython2 and PyPy is most likely due to the small overhead between the Python interpreter and the underlying native code, while the Java implementation must leave the Java Runtime Environment (JRE) for each read and write operation, since they are also natively implemented and a JNI call is relatively expensive. The speed advantage of the PyPy based execution is probably based on the just-in-time compiler that can increase the speed many times.

The results from this prototype gave the crucial factor to implement the RAID feature in native C – independent of the programming language that would be used for the remaining part of the software. To get better benchmarking results for C there was a test with a 1.9 GB file including compiler optimization like the -O3 flag:

This table clearly shows, that Clang is doing a better optimization than GCC does. But nevertheless, using the JNI, the performance of both implementations changed and GCC was slightly faster than Clang.

To get the performance of the final implementation, some benchmarks on the environments, that have been defined in 6.1 on page 54, have been performed. Therefore files of the sizes 10 kib, 100 kiB, 1 MiB, 20 MiB, 50 MiB, 100 MiB, 250 MiB, 500 MiB and 1 GiB have been created, split and merged. Every complete process (creation - split - merge) has been run eight times for each size on each benchmark environment. On the third environment additional tests for the sizes 2 GiB, 3 GiB, 4 GiB and 5 GiB have been performed to find and show anomalies for large files. 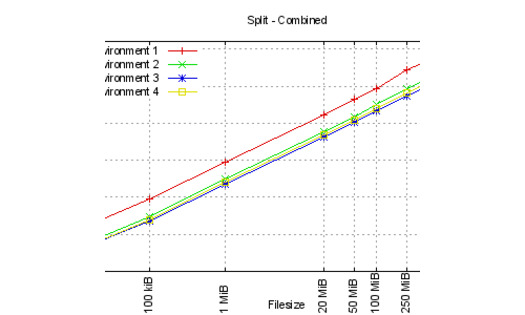 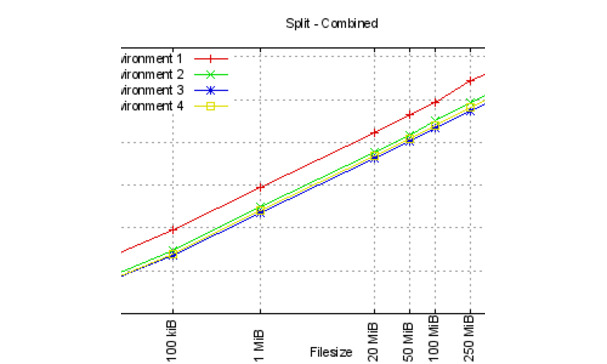 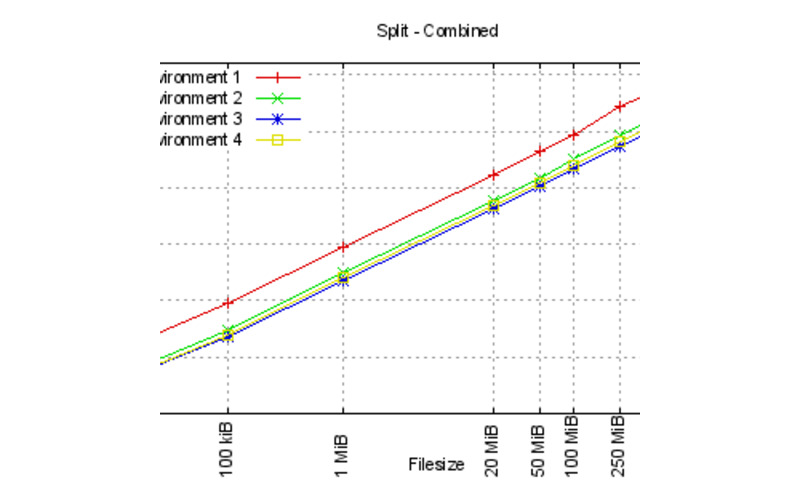 Using the T400 notebook with above specifications, the run-time increases for the files larger than 100 MiB. There is no proved explanation for this phenomenon yet, but it has been appeared during all benchmark runs and is not just a single outlier distorting the statistics.

For the third and forth environments the run-time is linear for all files, even for the huge files. As one can see in figure 2, the relative run-time increases for files of size 2 GiB and larger as well. 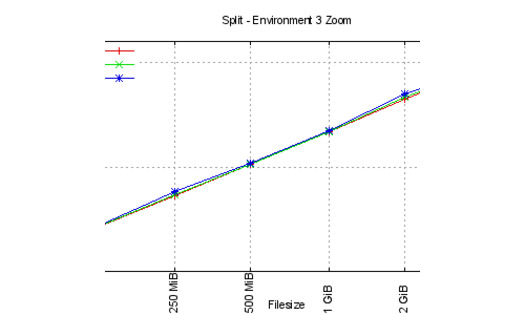 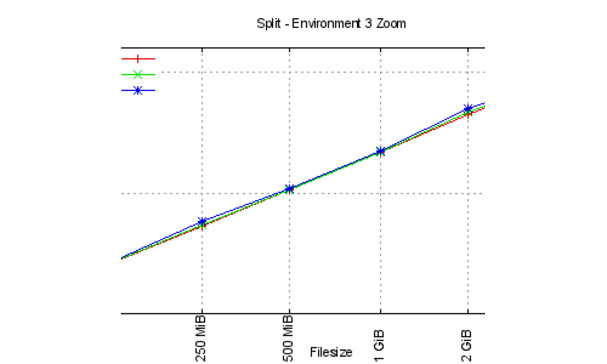 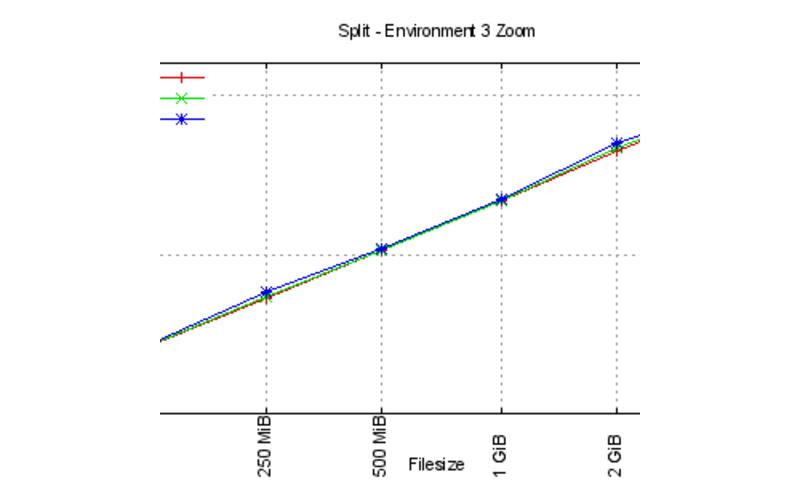 After a file has been split into its three device files and regarding information has been stored in the meta data file, the benchmark tool combines these device files to the original file. Again one can see from figure 3 that the overall process is mostly linear, except for the range of very small and very large files. Similar to the split process the hard drive accesses to open the files is probably the main reason for the decreasing relative run-time between 10 kiB and 100 kiB.

Similar to the split process, environment 3 shows an increasing relative run-time for files greater or equal to 2 GiB as one can determine from figure 4 on page 60. 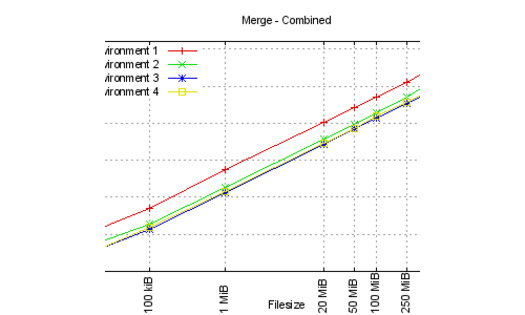 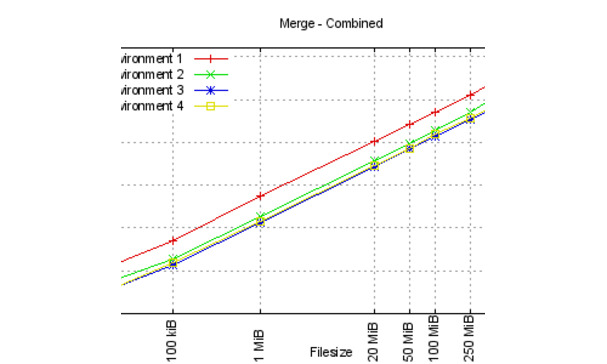 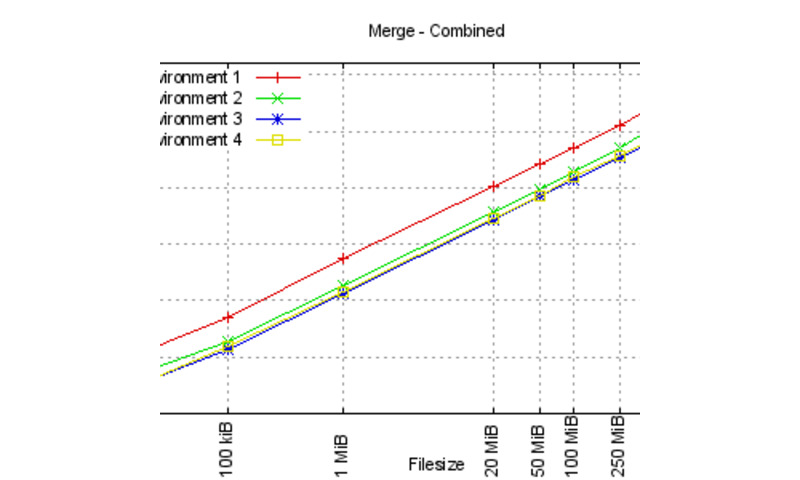 Besides that, the storage devices for the primary two environments are encrypted while the other two hard drives are plain. But due to the implementation of the underlying encryption as part of the Device Mapper of the Linux Kernel, the hardware access is fully transparent and does not do any further hits or accesses on caches. Thus this has probably no or at least not a high impact on the hard drive throughput and only affects the Central Processing Unit (CPU) usage.

[The] Device-mapper uses block devices, such as hard disks and flash-storage devices, and represents them as other block devices by adding various features. The LVM for example provides flexible partitioning of the block device, while dm-crypt adds a transparent symmetric encryption layer to the device by using the Linux in-kernel Crypto API. [Hol12]

Finally, the slight difference in the throughput between the SSD and the third environment is probably caused by the amount of available memory. While the former benchmark environment can use up to 8 GB minus the memory used by the OS itself, the latter has twice that memory available (minus those used by the OS). Thus the files are being cached in in-memory and are not even written to disk. But unfortunately there is no way to check whether the data has been written to disk. Another influence leading to the performance disadvantages of in the forth environment might be caused by the SATA controller. 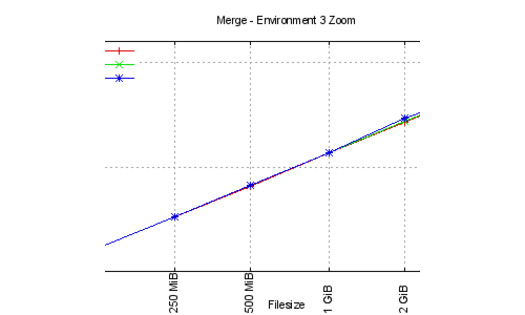 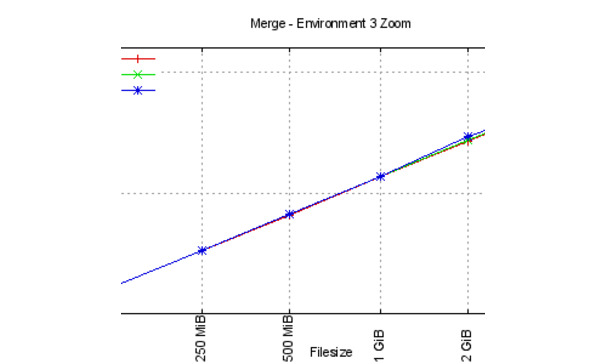 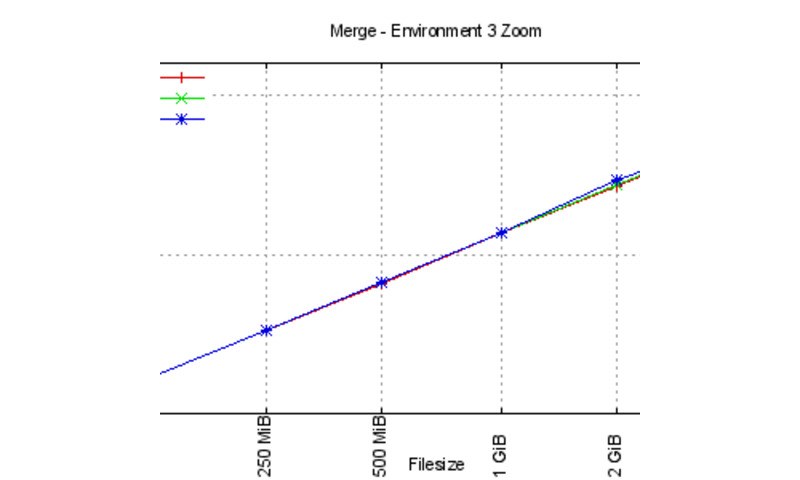 While the figures above only show the compared speed for either split or merge for all four benchmark environments, figure 5 illustrates the relative speed between the split and merge processes for the benchmark environments. One can see, that the split process takes much more time than the merge process for the same file size. This is most likely caused by the number of bytes that are written to the hard disk. While a call to split_file() with an input file of size n writes 1.5 × n + 518 bytes and reads n bytes, the regarding merge done by merge_file() only writes n bytes but reads 1.5 × n + 518 bytes. Since reading is generally much faster than writing this explains the speed of merge processes. 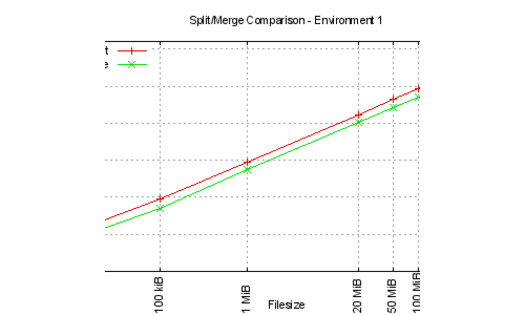 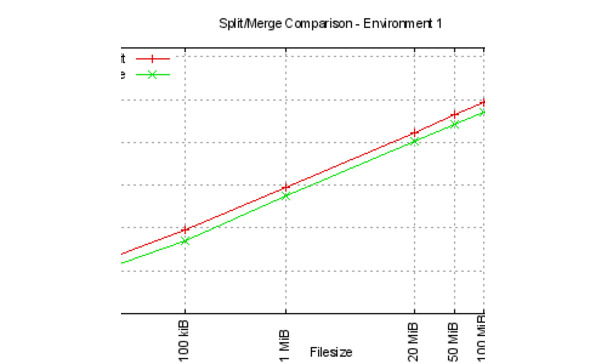 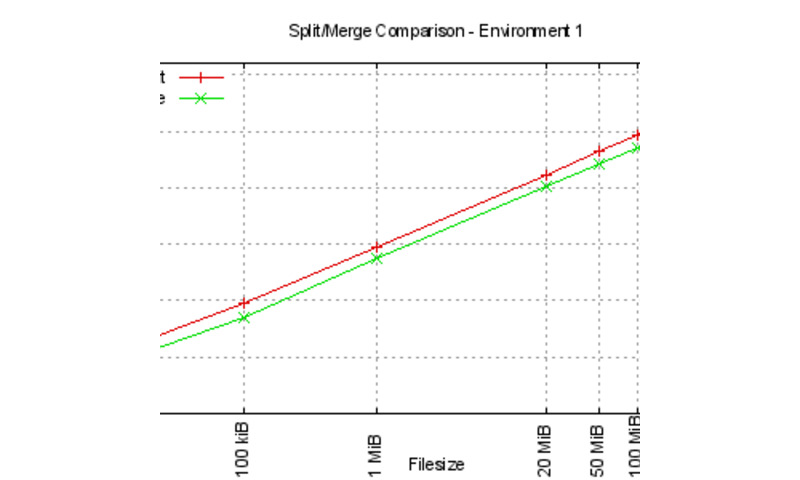 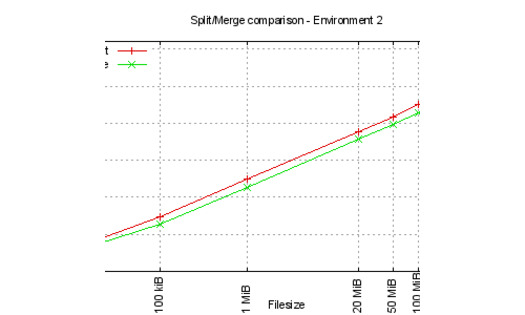 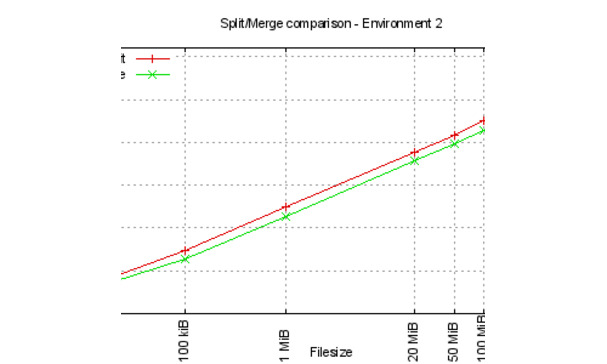 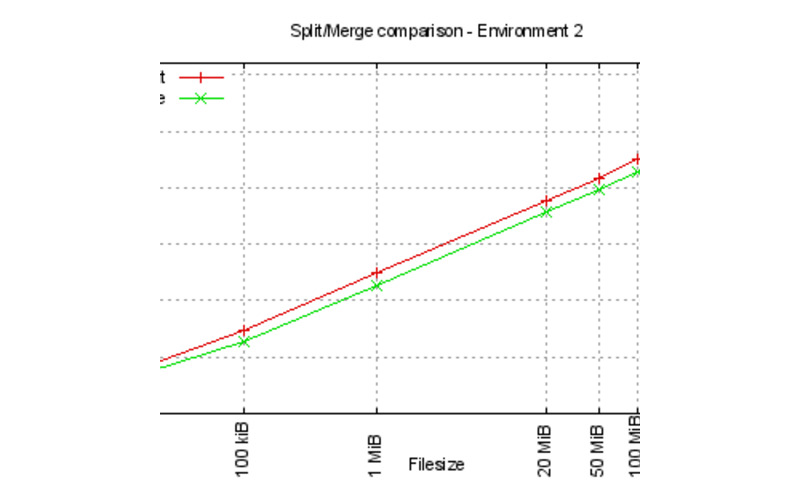 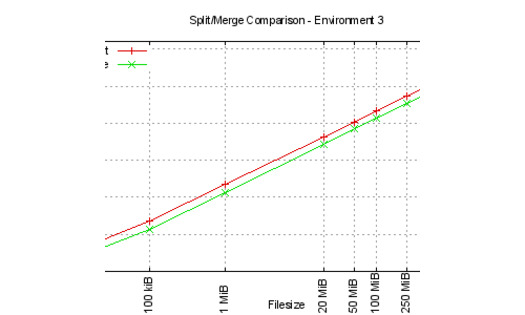 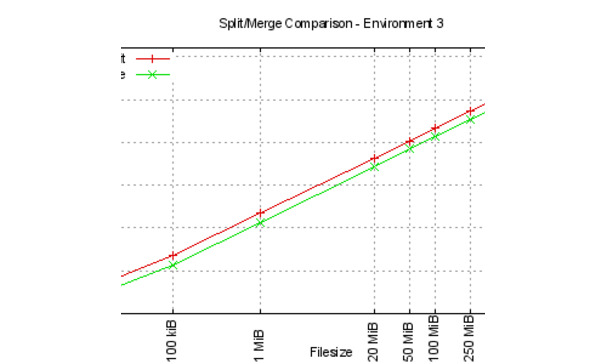 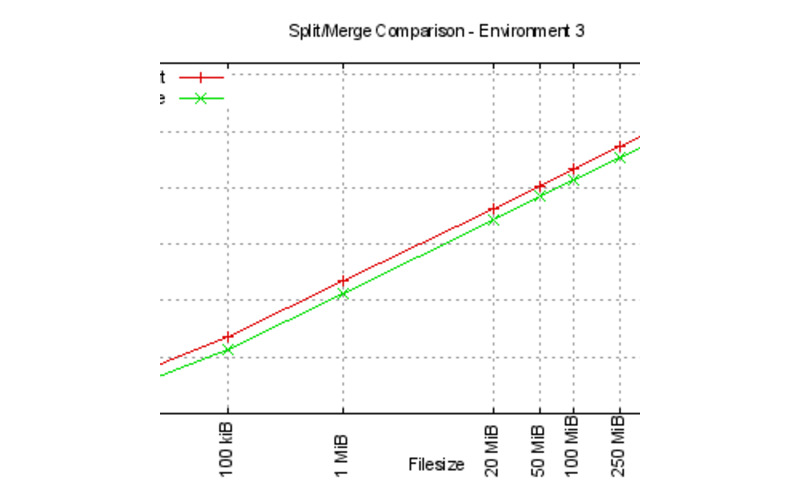 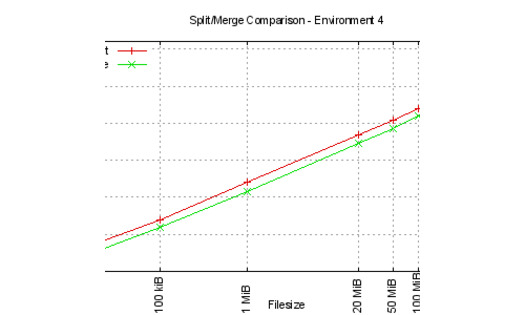 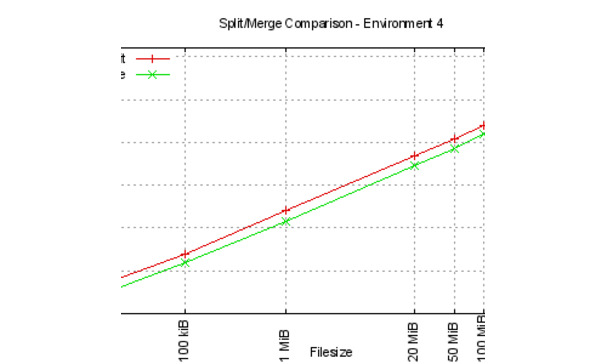 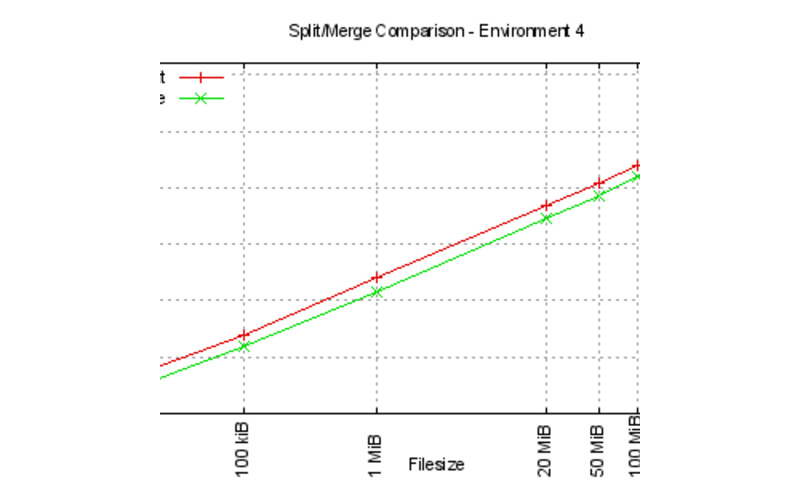 Figure 5a - 5d: Split and merge comparisons for environments one to four